On December 15, 2017, the City of Santa Clarita will officially turn 30 years old. In honor of this milestone the City asked local students to join in and celebrate creatively! Our local Elementary Schools were asked to come up with a tribute to the City on its 30th anniversary. 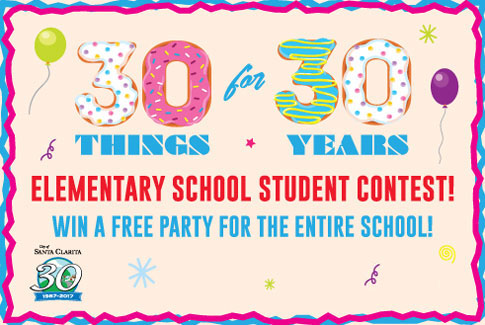 Use your imagination!  Collect 30 bags of non-perishable food items to donate, have your class write 30 poems, have the entire school do 30 jumping jacks, stand in the shape of a 30 on the playground, plant 30 plants in your school garden, research 30 historical facts about the City, take 30 pictures of 30 oak trees, walk for 30 minutes, draw 30 pictures of City locations, collect 30 items that represent Santa Clarita, choose 30 items to put in a time capsule, whatever 30 things you choose to celebrate the City’s 30th birthday!

All schools who participated had the chance to win a party on the City’s
actual anniversary, December 15!

A compilation of the entries was presented to the City Council at the council meeting on Tuesday, November 28. The winning school will enjoy a party with the City Council on Santa Clarita’s anniversary December 15! 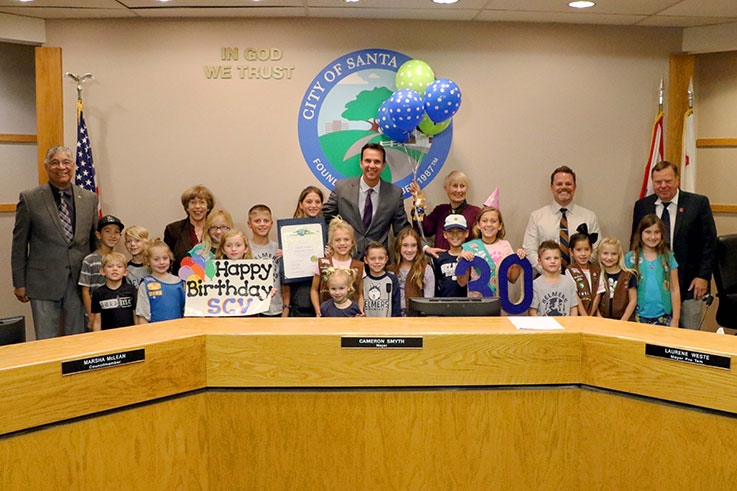 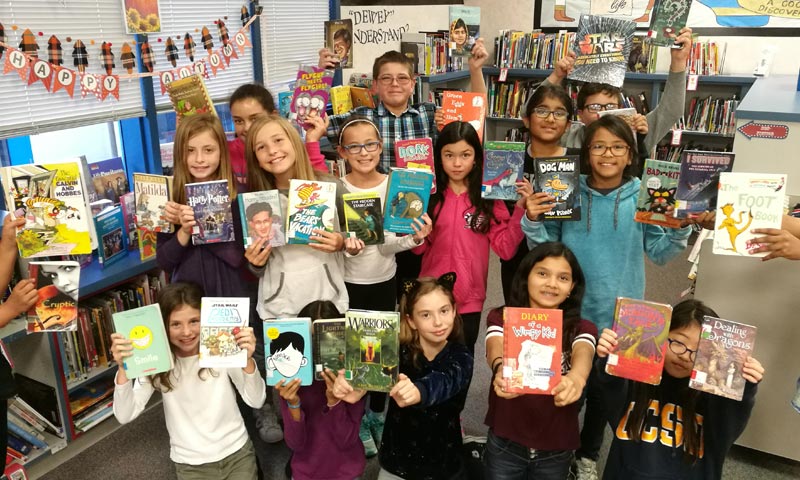 At Bridgeport Elementary, School Librarian Ms. Ferrel worked with her fifth and sixth grade library helpers to come up with their favorite 30 books from the school library. 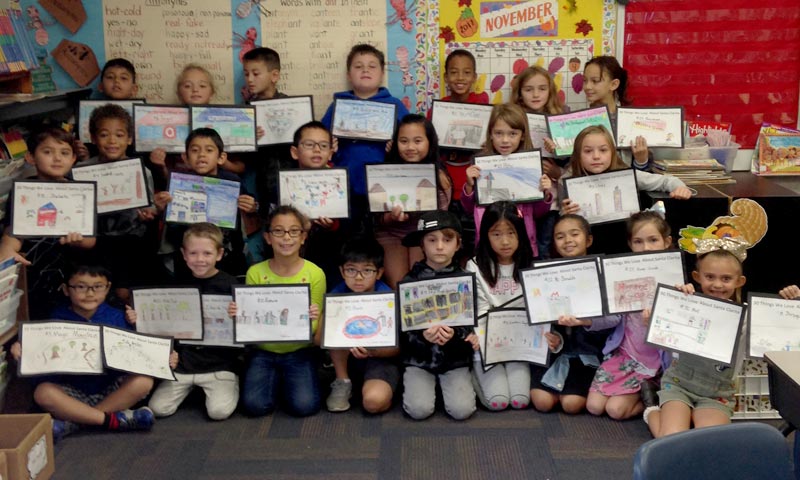 Mrs. States' 2nd grade class at Bridgeport Elementary brainstormed their favorite things about Santa Clarita and then drew an illustration. Some of the things they drew pictures of include our bike trails, Heritage Park, basketball courts, the library, their homes and their school. 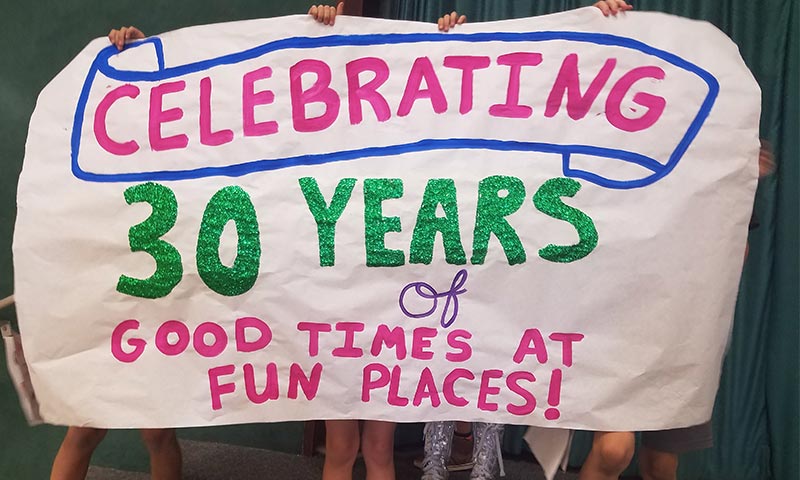 Class #18 at Castaic Elementary School loves SCV! They thought of 30 fun places the kids love to visit in our awesome city. 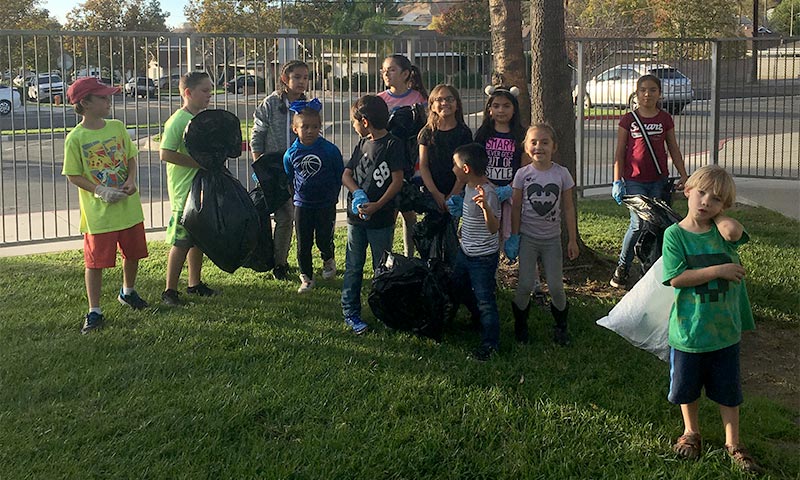 Ruby, a fifth grader at Cedarcreek Elementary, read about this contest and was determined to get other students involved. She organized a group of kids from all grade levels and got them to stay after school, spending 30 minutes cleaning their campus. She knew that the custodians had been having trouble with all windy days and decided to take action and help out.

The students at Charles Helmers Elementary School wanted to give back to the City and came up with the idea of giving to 30 different charities and organizations in Santa Clarita. For the week of November 13-20 students collected donations, wrote hundreds of letters and planted 30 plants in honor of the city turning 30 years old. Each day they donated with a different giving theme, they even made a video highlighting all they did.

Wyatt and Morgan from Fair Oaks Ranch Community School wrote about 30 places they've visited in Santa Clarita, and then created a poster board with all of them! 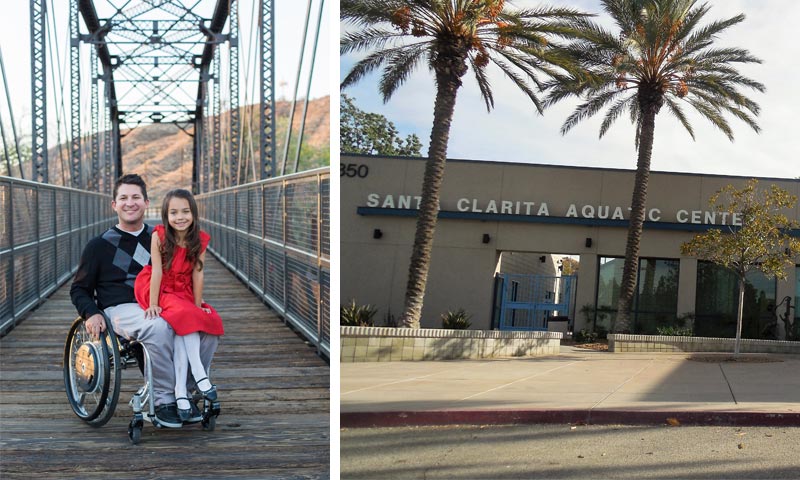 First grader Betty from Fair Oaks Ranch Community School loves to go places and have fun with her dad. For her submission she took pictures of 30 places in Santa Clarita that she can go to with her dad because they are wheelchair accessible. She wrote, “Thank you for making places in Santa Clarita wheelchair accessible for my family and other families that have people in wheelchairs.” Some of the locations she took pictures of include here at City Hall, the Canyon Country Community Center and the Aquatic Center. 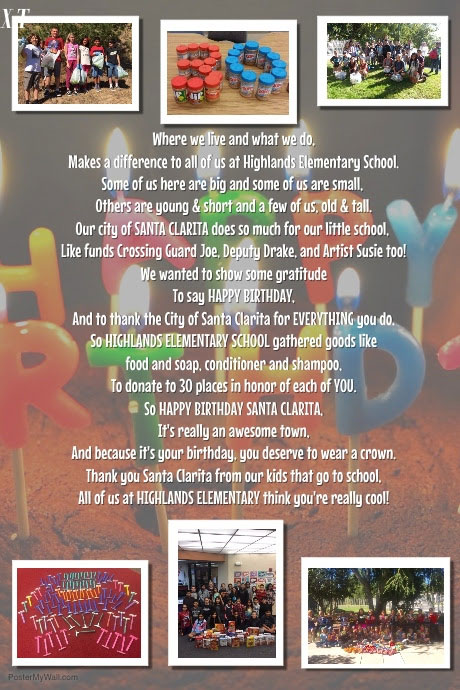 The students at Highlands Elementary School chose to collect 30 different items to donate to 30 different organizations in Santa Clarita. Some of the items they chose include personal care items for military care packages, food for the Help the Children food pantry, gently used toys and books for the Domestic Violence Center, warm socks and gloves for Bridge to Home. They also planted flowers in their community and did a recycling drive. 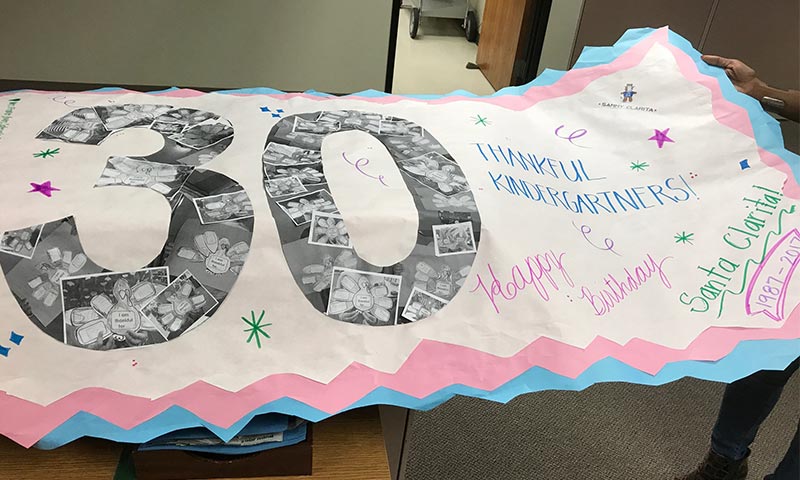 The Kindergarten classes at Mitchell Community School also created a beautiful poster for the City. The students were inspired by the recent Thanksgiving Holiday and created 30 turkeys with feathers highlighting the things they are thankful for. They also are big fans of our Sammy Clarita.

Alie is in sixth grade at Mountainview Elementary and she did 30 jumps in a row to celebrate the City’s 30 years, and ended with a super fast spin for "one to grow on." 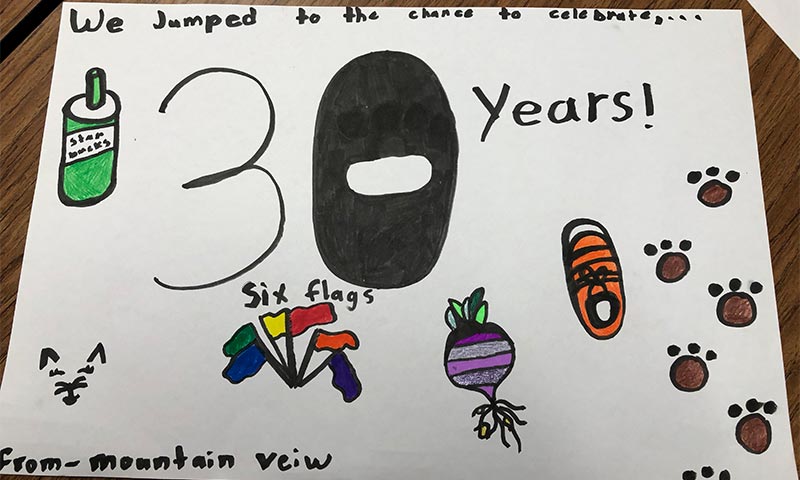 Mr. Crawford’s fifth grade class at Mountainview Elementary School jumped at the chance to take part in the contest. In fact they did 30 jumping jacks and created posters with the saying, “We jumped at the chance to celebrate 30 years!” These posters included some of their favorite things about Santa Clarita, including our super fun neighbor Magic Mountain, our libraries, parks, open space and one student even drew our famed onion that history says was plucked from under the Oak of the Golden Dream with gold on its roots.

We got a special submission from 6th grader Lexi at North Park Elementary School. She is the Vice President of Student Service and she celebrated the 30th Anniversary of the City of Santa Clarita by catching 30 waves at Surfrider Beach in Malibu! It was with the group AWOW-A Walk on Water. They do surf therapy for kids with disabilities. Lexi was invited to participate because she is blind. She described the day as a wonderful experience that she will never forget and was so thankful for the volunteers that gave their time to help her and many other kids enjoy the wonder of surfing. She also is planning on a future in City Government and wanted to know how old you need to be to run for City Council. 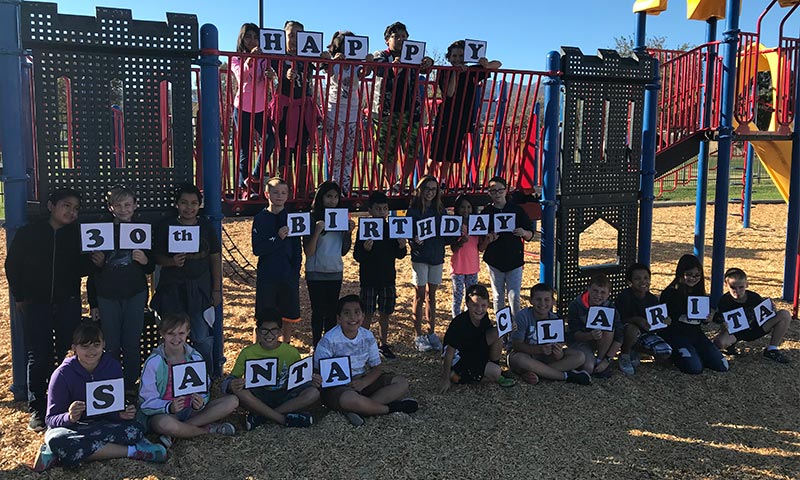 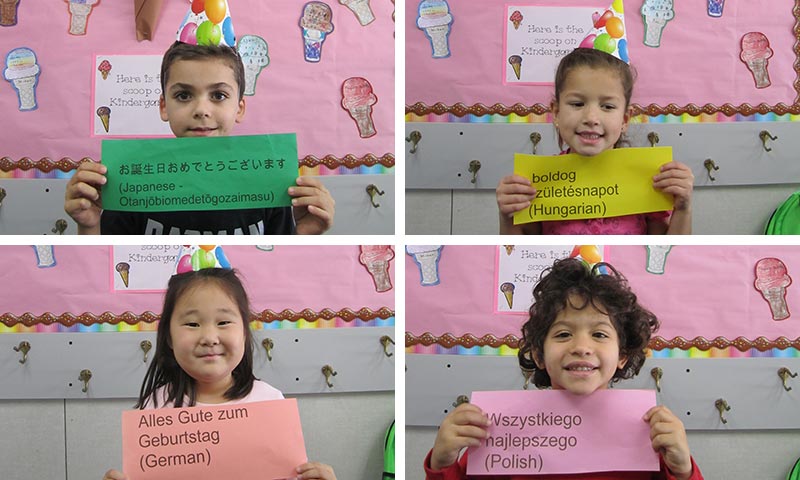 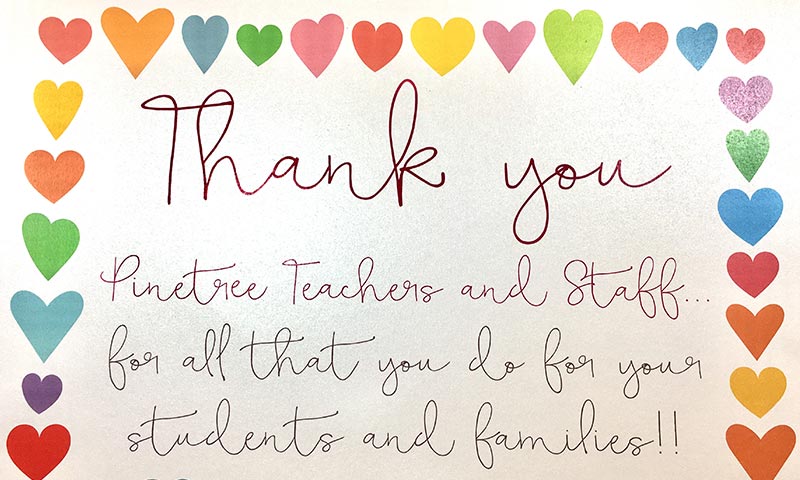 Mrs. Evans' Kindergarten class at Pinetree Elementary School celebrated their teachers and staff as well as the City’s 30 years. They are working on 30 ways to show their appreciation. 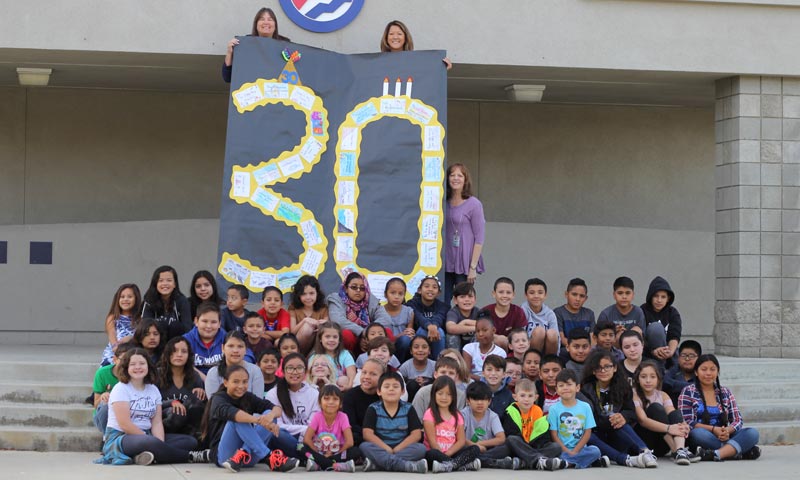 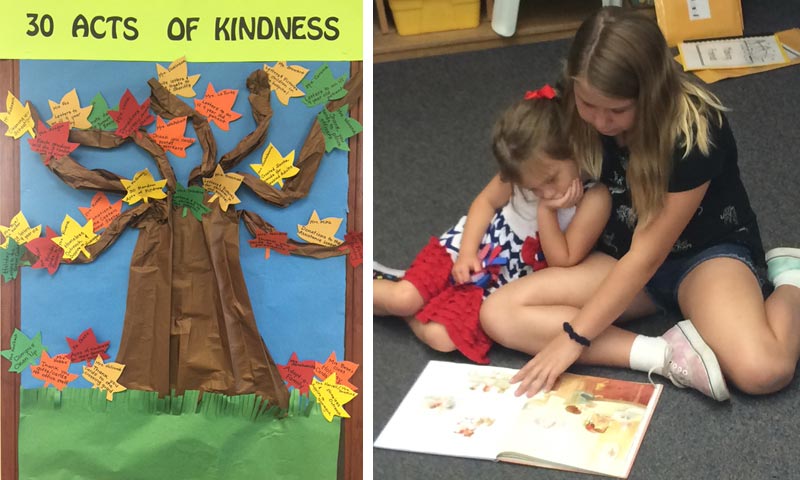 Rosedell Elementary School has exactly 30 classes and they decided to perform thirty acts of kindness. Sixth grade teacher Kevin McGroary created a sample list of acts that would make the world a better place and shared them with students. The students then completed daily acts of kindness such as holding the door open for others, tutoring younger students, making donations to charity and simply sharing compliments and smiles with their peers.

As part of a STEM project, 6th graders at Santa Clarita Elementary School built 30 rockets and launched them into the air. Along with their submission they wrote “We would like to celebrate the City of Santa Clarita's 30th birthday by sharing these rockets with you. Here's to another great 30 years!” 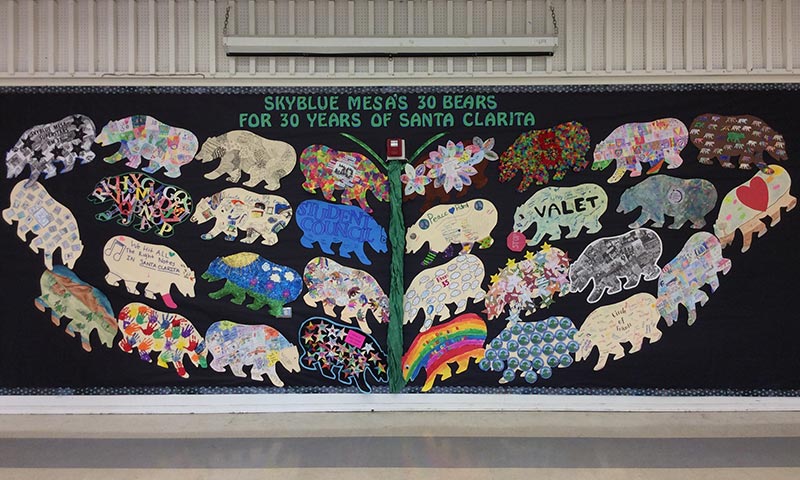 The students at Skyblue Mesa Elementary School were inspired by our Art Bear family at our parks, the mall and library, as well as other City locations. They chose to pay homage to the City by decorating bear cut outs that represented the students, their school and the City. Through meaningful discussions and brainstorming sessions, the students and staff of Skyblue Mesa were able to creatively celebrate 30 years of Cityhood with these 30 bears which grace the wall in the school’s Activities Room.