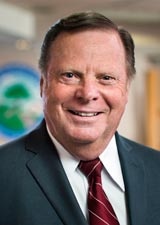 Bob Kellar joined the City of Santa Clarita as a first-term Councilmember in April 2000, and served as Mayor in 2004, 2008, 2013 and again in 2016.  Kellar’s goals for his time on the Council include working to resolve the CEMEX mega-mining and the Whittaker-Bermite property clean up issues, support of senior services, the attraction of high paying jobs for residents and continued advancements in the area of economic development, support of the arts, and raising awareness about drug issues affecting youth and local organizations dedicated to helping families in crisis, among many other initiatives.

Councilmember Kellar began his life of public service by entering the United States Army from 1965 through 1967. This was followed by 25 years with the Los Angeles Police Department.  Kellar retired from the LAPD in 1993, finishing up his career as the Supervisor in Charge of Reserve Officer Training at the Police Academy. Throughout his more than 36 years as a Santa Clarita resident, he has played an active role in the community, serving on several local non-profit boards and committees.

Kellar is proud to be a 20+ year member of the Santa Clarita Valley Veterans Memorial Committee. He served as past president in 1993 and 1994. Bob feels very strong about supporting the local veterans community and the country.

As a former Chair of the City's Planning Commission, Kellar stood strong to insure that new development follows a more sound and responsible approach to growth. As a City Councilmember, Kellar has worked hard to prevent the proposed Cemex mining operation from going through. Additionally, Kellar has been a driving force in bringing stake holders together to get the Whittaker Bermite site cleaned up and with a responsible development in place.

Kellar is proud of the work he has been able to accomplish on behalf of the citizens of Santa Clarita. His success has largely been the result of his ability to bring decision-makers together and put them on a common course.

Kellar considers one of his primary responsibilities to be his availability to Santa Clarita’s citizens and to do what he can to maintain a high level quality of life for all.