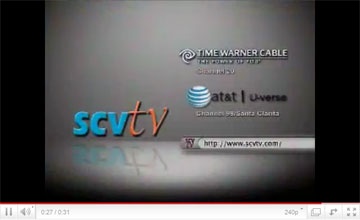 Thanks to the vision of a special committee established in the early 1990s - which included the City and community leaders from the private sector, non-profits and schools - SCVTV, Santa Clarita's community television station, got its start. The primary goal of the committee was to model a television station that would serve the widest range of the community. From early on, several partnerships were formed: Hart District ROP and College of the Canyons college programming were two specific examples of long-lasting collaboration. Since it's formation thousands of programs have been created benefiting the community at large.

Get the inside scoop on what's going on in the City as it happens LIVE!
The City Council and Planning Commission meetings air Tuesday nights on Channel 20. Visit our online agendas page for detailed information about each meeting.

All this on Channel 20 - Santa Clarita Television!

Sign up to receive e-mail notifications for breaking news!