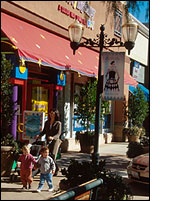 Over the past ten years, Santa Clarita's population size has continued to steadily increase. During this time period, the population growth was the result of new housing construction in the City as well as annexations of surrounding areas into the city limits. Since 2007, the population of Santa Clarita and other comparison cities appears to have slowed down compared to the first part of the decade.

In fact, Santa Clarita's population grew by 17.5% from 2000 to 2010 and was almost twice the growth experience in all of Los Angeles County. Only the communities of Lancaster and Palmdale in the Antelope Valley grew faster than Santa Clarita.

Located either in or near the City of Santa Clarita are four well-known colleges whose total enrollment exceeds 60,000 students. In Santa Clarita are College of the Canyons, the fastest growing community college within California, along with California Institute of the Arts and The Master's College which are both renowned in their areas of specialty. Located near Santa Clarita is California State University, Northridge.

Another important indicator of the quality of life in Santa Clarita is test scores or Academic Performance Index (API) averages for each of the school districts serving Santa Clarita. Performance increased among every school district in 2010 compared to 2009. The district with the highest API is Newhall School District with an API in 2010 of 896. The API for the William S. Hart Union High School District which encompasses junior and senior high schools rose to 824 in 2010 from 816 in the previous school year.

Each of the Santa Clarita based school districts attained higher APIs in 2010 than the Los Angeles Unified School District, and all had higher or comparable APIs to other districts of cities nearby.

In the Santa Clarita area, 38 schools comprise the elementary school districts and 19 junior high and high schools are part of the William S. Hart Union High School District. The majority of these schools are either California Distinguished Schools and/or National Blue Ribbon Schools. This further demonstrates the superior quality of education available to families with children under the age of 18 in Santa Clarita.

More than one-fourth or 28% of Santa Clarita's population is Hispanic compared to 47% of Los Angeles County and 36% of California's population.