Traffic signal synchronization is a method of timing groups of traffic signals along an arterial to provide for the smooth movement of traffic with minimal stops. The quality of the resulting progression is a function of the spacing of the signals, the prevailing speed, the amount of traffic coming in and out of driveways between traffic signals, the uniformity of intersection sizes, and the cycle length. The traffic volume and the proportion of the green time given to the preferred movements are also important. 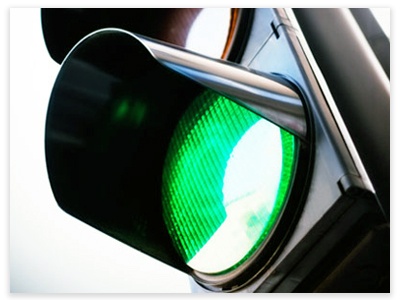 The goal of synchronization is to get the greatest number of vehicles through the system with the fewest stops in a comfortable manner. It would be ideal if every vehicle entering the system could proceed through the system without stopping. This is not possible even in a well-spaced, well-designed system. Therefore, in traffic synchronization, "the majority rules" and the busiest traffic movements are given priority. Depending on a route, the master cycle length of an arterial could vary from 60 to 120 seconds. This means that if you were exiting a side street, and you just missed the light, it is possible to wait between 60 and 120 seconds, or whatever is the cycle length, before receiving another green light. Generally, the busier and the bigger the intersection, the longer the required cycle length.

Not all City streets warrant synchronization. Typically, a street is selected for synchronization if it carries a certain amount of traffic along the arterial during peak hours. Most of the City's major streets are selected, like Soledad Canyon Road, Valencia Boulevard, Lyons Avenue, portions of McBean Parkway, Orchard Village Road, portions of Bouquet Canyon Road, and Seco Canyon Road. In most cases, synchronization is active from 6:30 a.m. to 9:00 a.m. during weekdays. The individual signals operate on a "first-come-first-served" or traffic activated basis outside of these hours.

The City has invested millions of dollars for the installation of traffic signal interconnect in the past years, using grant monies and developers' contributions. These infrastructures have a two-fold function. First, they enable a series of adjacent signals to time or function as a group and not independently from each other. Second, they serve as the communication link between traffic signals and City Hall. This link enables City staff to observe and control the operation of traffic signals from City Hall offices. This is a very effective tool in better handling freeway detours and other incidents. It enables City staff to adjust signal timing instantly in response to emergencies. The City is now in the process of installing a Traffic Signal Operations Center in City Hall where most of the City's signals will be monitored and controlled. The synchronization of traffic signals will be an ongoing effort by City staff. It will be updated on a periodic basis to better handle the changing traffic patterns.

If you have any questions regarding traffic safety issues, please call the Traffic Engineering Division at (661) 255-4942.