Each year the Traffic Engineering Division at the City of Santa Clarita fields over 100 emotionally charged complaints from residents who are concerned about speeding on their residential streets.

While this is a common problem encountered by every city, most residents are not informed about its causes or the available solutions. 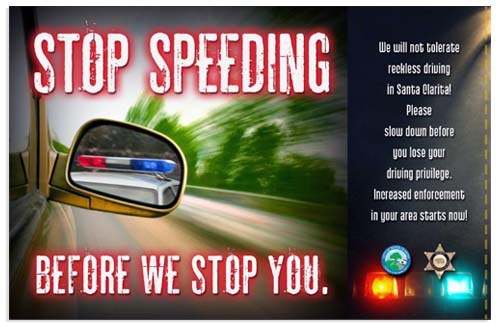 WHAT IS THE CAUSE OF THIS SPEEDING EPIDEMIC?

Changes in traffic flow do not occur overnight or without a reason. Our society and, more specifically, our community are dominated by a car culture that has risen out of the demands of our increasingly busy lives. In order to meet these demands, we often drive faster from our homes to our destinations and vice versa. For this reason, most residential street traffic, and therefore speeding, is caused by the neighborhood residents themselves. 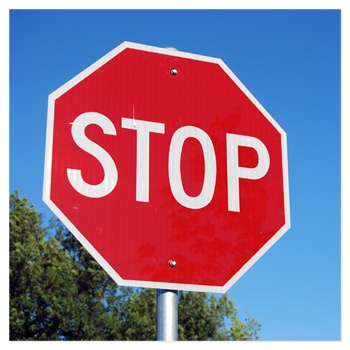 Stop signs are not successful in slowing traffic, except near the stop sign. Drivers try to make up for the delay by speeding up between stop-controlled intersections. This quick acceleration increases noise and air pollution near the signs. Stop signs are only appropriate for establishing right-of-way. The City installs a stop sign at an intersection only after a careful engineering evaluation of the existing conditions demonstrates the installation is appropriate.

"Slow - Children at Play" signs are often requested on residential streets. These signs tend to deliver a wrong message to parents and children who believe that the signs provide an added degree of protection from motorists, which the signs do not and cannot provide. Children should not be encouraged to play within the roadway. Although these signs used to be common on public streets, they are no longer approved by the State of California or the Federal Highway Administration as official traffic control devices.

Speed humps have been installed by many California cities and are currently being evaluated by the City of Santa Clarita for use in our residential communities. Speed humps can be effective in reducing vehicular speeds on residential streets (25 mph). They can also help to reduce traffic volumes; however, this can sometimes cause a diversion of traffic to nearby residential streets. Other potential negatives concerning the use of speed humps include longer response times for emergency vehicles, increase in noise levels as vehicles decelerate/accelerate at each speed hump, and increased maintenance costs.

In order to address the issue of emergency vehicle response time, the City has decided to assess a particular type of speed hump, called a speed cushion. Speed cushions are traffic calming devices designed as several small speed humps installed across the width of the road with spaces between them. They are generally installed in a series across a roadway resembling a split speed hump. The design of speed cushions forces cars to slow down as they ride with one or both wheels on the humps. The wider axle of emergency vehicles such as fire engines and ambulances, however, allows them to straddle the cushions without slowing down or increasing response times.

The City of Santa Clarita is currently conducting a pilot program to determine the effectiveness and community support of speed cushions. Following the conclusion of this pilot program, the City Council will determine whether or not these traffic calming measures are appropriate for use on City maintained streets. If the City Council decides that speed cushions are an appropriate traffic-calming device for our City, applicable policies and guidelines will be developed concerning their use. 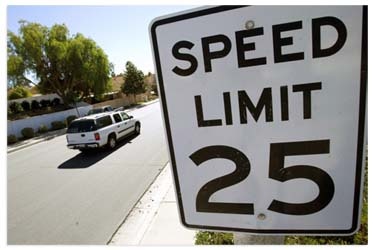 Citizens often request that the speed limit be lowered in an effort to slow traffic. Studies have shown no significant change in prevailing speeds when the speed limit is changed. Drivers continue to travel at speeds they feel are safe despite the posted limit.

Unrealistic speed limits can also present a safety hazard. Some drivers obey the lower speed limit, while others feel it's unreasonable and simply ignore it. This disrupts the uniform traffic flow and increases crash potential between the faster and slower traffic.

State law establishes certain speed limits based on research and studies of roadway conditions, accident records, and a sampling of the prevailing speed of traffic. The speed limit is normally set near the speed that 85 percent of the surveyed vehicles do not exceed. Other speed limits include the 25-mph speed limit in business and residential districts, the 25-mph limit in school zones when children are present, and the 15-mph limit in alleys.

The City of Santa Clarita implements the following actions to respond to speeding complaints:

The City has implemented the use of a PARET trailer to remind motorists of their responsibility to drive safely. The trailer displays the speed at which a vehicle is traveling in contrast with the speed limit for the zone. These units have been effective in many areas.

In most cases, the majority of speeders on residential streets are residents in the neighborhood. Ultimately, it is the residents who can do the most to reduce speeding in their area. Conversations and discussions about the problem in neighborhood meetings and circulating newsletters are the best methods of spreading awareness of speeding and other neighborhood issues.

IF YOU HAVE ANY QUESTIONS, REQUESTS, OR SUGGESTIONS CONCERNING TRAFFIC SAFETY MATTERS, PLEASE CONTACT THE TRAFFIC ENGINEERING DIVISION AT (661) 255-4942.