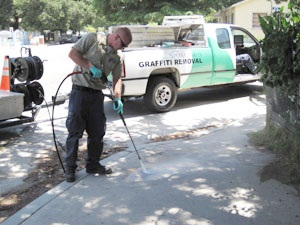 Graffiti within the City’s right-of-way is removed by Community Services Division staff within 24 hours of it being reported, thwarting the efforts of taggers looking for fame and to stake their claim on neighborhoods.

Staff includes: One Graffiti Removal Coordinator, one Program Specialist, a Graffiti Tracker who checks the hotline, Resident Service Center requests, and inputs all of the tracking information to apprehend vandals, and nine Graffiti Removal staff members. Staff members are responsible for a 56.8-square-mile area. 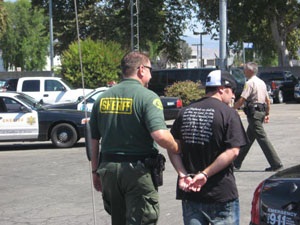 B. Arrest of Graffiti Vandals

The City partners with the Los Angeles County Sheriff’s Department Graffiti Detective, COBRA (Gang and Juvenile Crime Team), the Community Interaction Team (CIT), and the Crime Prevention Unit (CPU) to apprehend graffiti vandals. Since the inception of the e-graffiti database over 1,000 graffiti vandals have been arrested by the Santa Clarita Valley Sheriff’s Department, all with 100% conviction rate. The Sheriff’s Department utilizes the surveillance equipment near graffiti hotspots throughout the City to catch graffiti vandals in the act. City staff and Sheriff Deputies conduct sting operations at local hardware stores and home improvement stores to ensure compliance with the City’s Ordinance, which require spray paint and large-tipped markers to be locked up.

Taggers are now being forced to change their methods of tagging, and essentially, the whole culture of graffiti, for fear of being arrested and sent to jail.

The City conducts anti-graffiti awareness presentations to local elementary, junior high, and high school students to educate youth about the consequences of graffiti vandalism, to inspire them to take pride in their City, and to inform them about the City’s Reward Program.

The PowerPoint presentation is youth-oriented and clarifies the difference between graffiti art and graffiti vandalism. The presentation explains the severe consequences for graffiti vandalism, both for the tagger and the community, by using interactive questions and answers. The “Tag: You’re It” DVD is also shown in conjunction with the presentation. The DVD includes first-hand testimony from two youth jailed for graffiti vandalism, and their experience in being arrested, convicted, and spending time in jail. The DVD also includes testimony from the mother of a tagger about her family’s experience, as the result of her son being a convicted tagger.

Another short film called: “So you want to be a tagger?” was created by students from Valencia High School Video Production in partnership with the Graffiti Task Force to inform students of the consequences of graffiti vandalism. View this video below.

*This comprehensive outreach program includes an educational component for parents – informing them about the signs of a “tagger,” and what to do if they suspect their child may be a “tagger.”