Get notified via email for
CEMEX Project Information. 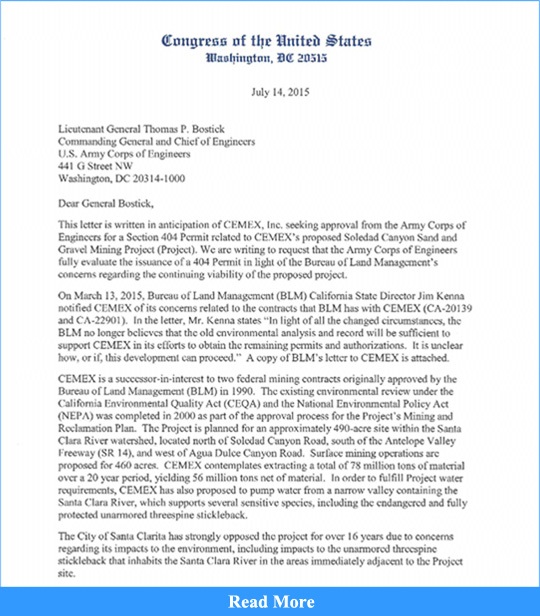 Read the Bureau of Land Management's Letter to CEMEX 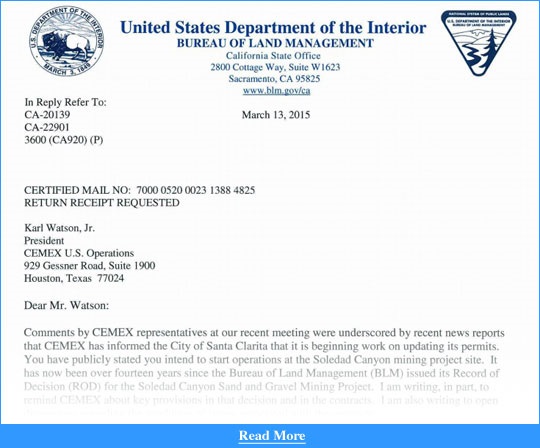 Q: What does the mining projected entail?
A: The proposed CEMEX mining project in Santa Clarita involves the surface mining of 56 million tons of aggregate over 20 years on a 460 acre site at the City’s eastern boundary, east of the Antelope Valley Freeway and directly adjacent to the Santa Clara River.

Q: What impact will this project have on the community?
A: According to various studies conducted over the years on the impacts of this project, we can expect significant negative effects on the entire Santa Clarita Valley.  At full capacity, the project will have excavation activities going on 17 hours per day, six days per week.  Processing is scheduled to take place 16 hours a day and shipping activities are expected to take place 24 hours a day.  The increased dust levels and air pollution may have significant negative effects on the health of local residents.

Q: How will the material be transported?
A: The CEMEX project will add up to 1,200 truck trips on our already-congested freeways. These will be large, slow moving trucks that regularly drop loose rocks and debris onto roadways, damaging automobile finishes and windshields.  Once the project is fully underway, this will mean one additional large truck on local roadways every two minutes, 24 hours per day!

Q: Will there be loud noise generated from the mining?
A: Yes, blasting will occur at least twice a week for the first 10 year phase of the project and four times a week during the second 10 year phase.

Q: How long will this project last?
A: Currently, CEMEX has the right to mine with two 10-year leases, for a total of 20 years.

Q: How is CEMEX able to mine in the area, even though the City owns the property?
A: While the City owns the surface property, the federal government’s Bureau of Land Management (BLM) lays claim to the mineral rights beneath it and has provided two 10-year leases to CEMEX to mine the rock under our City-owned land.

Q: What is the current status of the project?
A: At this time, CEMEX is pursuing the necessary permits to start the mining project.

Q: Since the City of Santa Clarita owns the land, will the City receive any benefit from the mining efforts?
A: That is to be determined.

Q: What can residents do to help support the City’s fight against this project?
A: At this time, we are asking that you stay engaged with this issue.  Sign up on our CEMEX eNotify page to receive email updates on the issue, including any upcoming meetings, community letter writing needs, updates on legislation and outreach efforts.

The Soledad Canyon Settlement Act is potentially the last chance to amicably end a 14 year dispute between the City of Santa Clarita and CEMEX USA (CEMEX) over a sand and gravel mine the company proposes to operate in Soledad Canyon. S. 771 would require the Bureau of Land Management to cancel CEMEX’s right to mine at the contract site in Soledad Canyon and ensure CEMEX is fairly compensated through the sale of BLM owned land in San Bernardino County. These public lands have been identified by the BLM for disposal.

For more information on this important bill please refer to the following PDF documents:

On November 20, 2013, S. 771 was presented to the Senate Energy and Natural Resources Subcommittee on Public Lands, Forests, and Mining. Representatives from the City of Santa Clarita, including Mayor Bob Kellar and Mayor Pro Tem Laurene Weste, were in attendance, with Mayor Kellar providing testimony. Additional testimony on S. 771 was offered by Senator Barbara Boxer (D-CA), Senator Dianne Feinstein (D-CA), Congressman Howard “Buck” McKeon (R-CA-25), Steven A. Ellis - Acting Deputy Director of the Bureau of Land Management, and Cliff Kirkmyer - Executive Vice President of Aggregate Resources for CEMEX. Official copies of the testimonies submitted for the hearing are provided below.