In the past ten years, the Santa Clarita Valley and other communities have seen an unprecedented growth in student population in the Public School Systems. Elementary School Campuses once designed for 400 Students have seen the enrollments double to 800 or more. Most of the schools are having to change to year-round schedules, and the playgrounds are covered with portable classrooms. 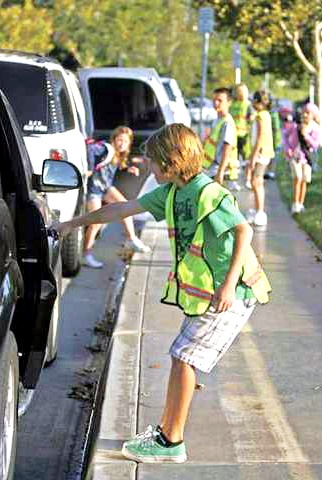 Add to this the two income family and the general fear that our streets are unsafe for our children to walk. These facts all combine to make a traffic nightmare around our schools. Imagine if you haven't seen it, 800 students arriving within a 15-minute period, most by car and on residential streets not designed for the volume. School Administrators have reported fist fights among parents over parking spaces, and have been abused by parents when they try to direct traffic on their campuses.

In June of 1999, Santa Clarita Sheriffs Brian Lendman and Richard Phares were assigned to directed patrol cars to answer the Community's concerns about traffic in the valley and around our schools. They initially started enforcement by enforcing traffic laws around the schools (i.e., no parking signs, double parking, fire hydrants, etc.). It became quickly apparent that this only angered some people and others just paid the fines thinking that they would not be caught again.

Their next step was to work with the City to change the "no parking signs" around the schools by creating and installing "Passenger loading and unloading zones" with specific times listed. This gave the parents an area to drop off students, and we enforced this by not allowing drivers to exit their vehicles. This was partially effective, but the volume of traffic was still too great for available parking and drop-off areas around our campuses.

In January of 2000, Sheriffs Lendman and Phares received a video from the Peace Officers Association of Los Angeles County. This video showed a School Valet Drop-off Program developed in the Torrance Unified School District. With video in hand, they approached one of school principals and asked if the school wanted to try this program. Sheriffs Lendman and Phares worked out the details and designed a student training program. In February 2002, the Sheriff's Department implemented the Santa Clarita Valley, Student Valet Program.

The program in overview uses the 5th and 6th grade students as valets to open the car doors of arriving students in a specially designed drop-off area. The drop off area allows 10 to 15 cars at a time to enter, drop off and leave in as little as 55 seconds. Fourth grade students help out as escorts or walkers. These students walk the younger ones to their classroom or a line up area so the parent does not have to park and escort their child onto the campus.

The program was an immediate success. Traffic was so drastically reduced around the pilot school that concerned parents called the campus to verify that the school was in session. The residents who were plagued by the traffic problems in the past called to compliment the school and the Sheriff's Department.