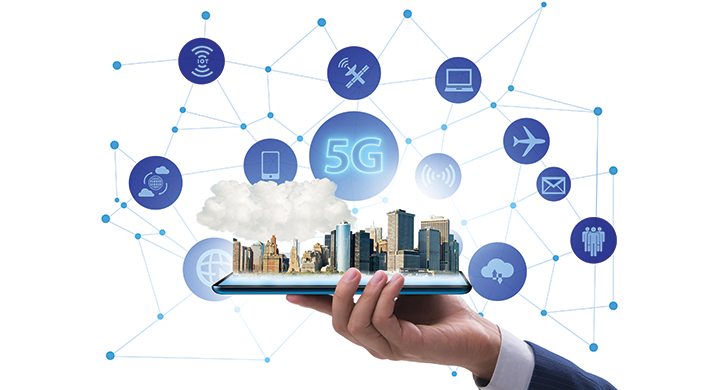 Q: What is 5G?
A: Term commonly used for the next, aka 5th, generation of wireless cellular technology.  It has the potential to provide peak download and upload speeds comparable to fiber connectivity, together with near real-time responsiveness, while connecting a multitude of devices simultaneously. In addition to keeping up with mobile video consumption, 5G is intended to support new technologies such as autonomous vehicles and other use cases that will require near real-time connectivity in addition to the ever-increasing proliferation and use of mobile devices. 5G specifications are still under development by the 3rd Generation Partnership Project, an international standards organization that develops protocols for mobile telecommunications, and will be released over the next decade for implementation into consumer devices. Early commercial 5G deployments have occurred in Sacramento, Los Angeles, Phoenix, Chicago, Minneapolis and New York, among others.

Q: Who regulates 5G and other wireless communications?
A: Federal, state and local agencies each regulate different and sometimes overlapping aspects of 5G and wireless communications. The Federal Communications Commission (FCC) regulates interstate and international communications by radio, television, wire, satellite and cable in all 50 states, the District of Columbia and U.S. territories. The FCC is the primary authority for communications law and regulation and preempts state and local governments from regulating key aspects of infrastructure deployment. For instance, state and local governments cannot regulate the environmental effects of radiofrequency exposure to the extent the emissions comply with FCC guidelines. At the state level, California grants authorized telephone corporations to access the public rights-of-way to provide services and the California Public Utilities Commission (CPUC) regulates pole attachments and safety standards to aboveground and underground infrastructure. Subject to federal and state limitations, local governments regulate the design, placement, operation and maintenance of wireless infrastructure within their respective jurisdictions.

Q: What defines a small cell (frequency, operating power, or emitted power)?
A: Per the FCC, small cells are defined according to height and volume. A small cell (or “small wireless facility” as that term is used by the FCC) means an attachment to a structure 50 feet in height or less, 10% taller than the height of an existing structure, or 10% taller than adjacent structures, whichever is greater; 28 cubic feet of accessory equipment; and any number of antennas as long as each one is 3 cubic feet or less. Small cells are not specifically limited by frequency – 4G small cells generally operate in sub-3 GHz frequencies and 5G small cells can operate in millimeter wave frequencies (30 GHz to 300 GHz) – but small cells generally operate at lower power levels with lower emitted power density.

Q: Who is demanding 5G?
A: Consumers, both human and machine users, are using more data and an increasing amount of connected devices, such as cars, tablets, robotics, manufacturing plants, and computers are using cell networks. This, combined with ever increasing video consumption, requires greater spectral efficiency and capacity to reduce congestion on the macro networks. Small cells are one key element to meet demand by reducing the number of users that access the network from a particular point at the same time.

Q: How does 5G differ from existing wireless technologies?
A: A common misconception is that small cells did not exist before 5G. Although 4G small cells have not been deployed in all jurisdictions across the country, they have been deployed in various dense environments and high-demand areas for at least the last five years. For 5G deployments, equipment will be added to existing macro facilities in addition to being deployed as small cells. Small cells consume less power and provide less range than macro cells, and can be deployed on existing right-of-way structures (such as streetlights) due to their ubiquity and availability of power and/or data connections.

Q: Can these devices be installed within the public rights-of-way in residential areas, commercial areas, and near schools?
A: Yes. State and local governments cannot effectively prohibit the provision of wireless services. FCC regulations require local aesthetic regulations to be (1) reasonable, (2) no more burdensome than those imposed on other infrastructure deployments, (3) objective and (4) published in advance. California state law gives the carriers the right to access the public right-of-way in all of these areas to the extent necessary to provide services and in such a manner that would not incommode the public use of the right-of-way. Taken together, localities may establish aesthetic-based location criteria but cannot prohibit deployment in residential, commercial and school areas in all cases.

Q: Why are these devices being allowed in residential areas and on streetlights and communication towers?
A: In September 2018, the FCC issued a “Declaratory Ruling and Third Report and Order” titled “Accelerating Wireless Broadband Deployment by Removing Barriers to Infrastructure Investment”, which introduced new rules that limit the ability of cities, such as Santa Clarita, to control where small cells may be installed and operated.  5G is expected to provide the speeds consumers require for the applications and technologies they use every day, which make it an alternative and competing solution to traditional means of wired communication, such as broadband and DSL, typically found in residential communities.

Q: What are the effects of radiofrequency emissions on health, safety, and the environment?
A: FCC limits the cities authority to regulate wireless infrastructure on the basis of health or effects on the environment. The City will require 3rd party verification of small cells in the public rights-of-way to ensure that they meet the standards required by the FCC. The FCC limit for the general population incorporate a 50 times safety margin, meaning that the limit is set at 2% of the point at which exposure causes a measurable response in human tissue. Click here for more information on RF and health concerns.

Q: Will the city provide any objective data regarding changes to Radio Frequency (RF) in locations throughout city?
A: All new facilities and modifications to existing facilities will require the applicant to submit an up-to-date RF compliance report certified by a qualified engineer or professional. If the facilities meet the FCC RF requirements, the city cannot consider them as a basis for denial when processing the application.

Q: Does any of this mean large-format, or traditional cellular towers can be installed anywhere?
A: No.  The recent FCC regulations generally apply to small cells. The City’s existing municipal code, Chapter 17.69, https://www.codepublishing.com/CA/SantaClarita/ still governs these traditional towers. una

Q: Does the City have a policy regarding Small Wireless Facilities aka 5G cell sites?
A: Yes.  The Santa Clarita City Council voted unanimously to adopt a policy for the approval and deployment of small cellular facilities within the City public right-of-way.  Click here to review the policy.

Q: What has the City done about the new FCC rules? Can it change the law?
A: The City Council and City staff have taken numerous steps to legally challenge and express the community’s concerns as it relates to the City’s ability to regulate where 5G technology can be installed and what they may look like.

Here is a timeline of the actions taken by the City Council regarding small cells and the FCC’s 5G regulations: